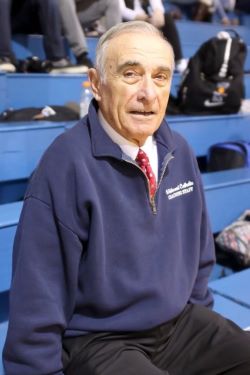 Wildwood Catholic Academy is set to honor one of its most iconic figures later this month.

The school has announced that its newly designed and refinished basketball court in its Sister Mary Ellen Ford Gymnasium will be named in honor of Fran St. John, who has been involved with boys and girls basketball at the school as a player and coach for more than 60 years.

A dedication ceremony will be held prior to the Wildwood Catholic girls basketball team’s first home game of the season against Ocean City on Monday, Dec. 19, at 6 p.m.

St. John, a standout player at Wildwood Catholic before graduating 1956, began a long coaching career at his alma mater as an assistant coach in 1966. He served two different stints as boys head coach that spanned from the late 1960s into the late 1990s, posting a career record of 306-283. He then was the school’s girls head coach for more than a decade beginning in 2000, crafting a career record of 146-129. St. John was the first coach in Cape-Atlantic League history to win more than 100 games as both a boys and girls head basketball coach.

He currently serves the school as an assistant girls basketball coach under Steve DiPatri.

As boys head coach, St. John led Wildwood Catholic to South Jersey championships in 1981 and 1988 and CAL titles in 1969 and 1992. He has been inducted into both the Al Carino Basketball Club of South Jersey Hall of Fame and the South Jersey Coaches Association Hall of Fame. All told, he has a career head coaching record of 452-412.

St. John was honored a little more than a decade ago for his then 45 years of coaching service at Wildwood Catholic. A banner hangs in the gymnasium to commemorate that occasion. But in two weeks, his name will forever be etched into the court, which is famous around South Jersey for its quirks, diminutive size and old-school charm.

“This court is home to so many victories and accomplishments that you can almost hear the cheers coming from the bleachers when you walk in,” Wildwood Catholic Academy principal Joe Cray said in a statement. “From basketball games to everyday gym activities for all age levels, this room holds a sense of home-town pride and community. Naming the new floor in honor of St. John is just one small step in acknowledging the history of this school, and the students that come from it.”

St. John, a resident of Cape May, is a retired schoolteacher who served as a longtime guidance counselor at Margaret Mace Elementary School.