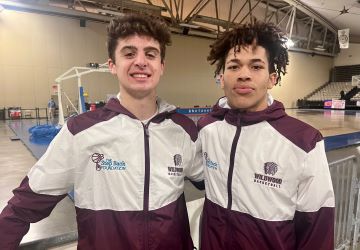 Sophomore Brian Cunniff (left) made the winning free throw with six seconds left in overtime and Junior Hans scored 31 points as Wildwood rallied for a 61-60 overtime win over Cumberland.

WILDWOOD – Brian Cunniff had a chance to make a huge basket near the end of overtime for the Wildwood High School boys basketball team, but dropped a pass while he was wide open under the basket.

He didn’t squander his second opportunity.

Cunniff, a sophomore guard/forward, took a feed from Ryan Troiano and scored while being fouled with six seconds to go in overtime. He then made the ensuing free throw to give Wildwood an unlikely 61-60 victory over Cumberland in the Bernie McCracken Memorial Boys Bracket at the Boardwalk Basketball Classic Wednesday.

Wildwood will face MaST Charter (Pa.) in the bracket title game Thursday at 7:30 p.m. at the Wildwoods Convention Center.

Wildwood trailed by 10 points with a little more than a minute to play and by nine points with 47 seconds remaining in regulation before rallying. A three-point shot by Jordan Fusik and two baskets by Junior Hans – one of which was a banked 17-footer – gave Wildwood a chance. Following a Cumberland turnover, Hans was fouled with less than 10 seconds to go and made both free throws to send the game into overtime.

Wildwood jumped out to a six-point lead in overtime before Hans, who led all scorers with 31 points, fouled out. Cumberland rallied and took a two-point lead at 60-58. Without a timeout, Wildwood pushed the ball quickly down the floor and Troiano found Cunniff open at the left block for the basket and foul. After Cunniff’s free throw, Cumberland advanced the ball to halfcourt and called timeout with 1.2 seconds left, but could only get off a hurried long jump shot that missed as time expired.

“Cumberland did a really good job against us and they have some kids that can play,” McCracken said. “But we hung around and stayed in the game. Our kids didn’t hang their heads and they did enough to win the game.”

Cumberland (2-2) got 19 points from Ethan Turner and 16 points and 13 rebounds from Qua’Yon Nock.