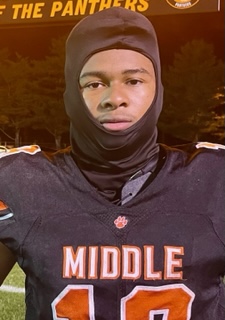 The sophomore running back produced 258 all-purpose yards and scored five touchdowns to lead Middle Township to a wild 37-33 victory over Absegami in an NJSIAA consolation game that served as the season finale for both teams.

After an explosion of offense that saw the teams combine for 57 points in the first half, it was a 22-yard scoring run by Rodriguez midway through the fourth quarter that gave Middle the lead for good. Patrick Yaeckel’s interception with a little more than two minutes to go sealed the victory.

All told, Rodriguez rushed for 147 yards on 27 carries, returned a kickoff 90 yards for a touchdown and also added 21 receiving yards when he scampered downfield after accepting a pitch from teammate Michael Zarfati on a hook-and-lateral play.

Rodriguez finished the season with 1,023 rushing yards on just 169 carries (6.1 yards per carry) despite missing two games, one for family reasons and the other due to a foot injury that lingered throughout much of the season.

“He’s been banged up all year with that Achilles problem, but we could see he’d been getting better and better each week,” Middle coach Frank Riggitnao said. “We saw him getting some of his zip back in our playoff game last week so we decided coming in here, with the number of injuries we’ve had, just to try to give him the ball as much as we could. Obviously, he’s a special talent and, lucky for us, he’s got two solid years left.”

Neither team could stop the other in an extraordinary first half. Middle eventually took a 30-27 lead into halftime on Jerome Licata’s 20-yard field goal on the final play of the half. The Panthers scored four touchdowns and Licata’s field goal on their five possessions of the opening half.

Absegami (3-7) took the lead midway through the third quarter on a 19-yard touchdown pass from Kendall Armstrong to Nyjere Robinson. Robinson, a junior, produced one of the all-time great single-game performances by a wide receiver in the history of Memorial Field, catching 11 passes for 154 yards and two touchdowns.

Middle later grabbed the lead for good on Rodrgiuez’s fourth rushing touchdown of the game with 5:44 remaining that finished a nine-play, 64-yard drive.

After Absegami drove across midfield with a little more than two minutes to play, Yaeckel’s interception at his team’s 35-yard line on a first-down play prevented the Braves from rallying again.

“We had an awful week of practice, to be honest,” Riggitano said, “but to win the game with all the injuries we’ve had is a credit to the kids.”

The end of the first half featured a whirlwind of scoring that resulted in the teams combining for 29 points in the final 4 ½ minutes.

After a two-yard scoring run by Rodriguez gave Middle a 21-14 lead with 4:12 left in the half, Robinson caught his first touchdown pass for Absegami on a 57-yard connection with 2:34 left.

Rodriguez then ran the kickoff back 90 yards for a touchdown to give Middle a 27-20 lead, before Absegami needed just three plays to score again with a little less than two minutes to go, Armstrong hitting Zach Parner from nine yards out to tie the game at 27-27.

A hook-and-lateral play that went for 29 total yards followed by a pass interference penalty and a 10-yard reception by Zarfati moved Middle to the Brave 2-yard line with two seconds to go to set up Licata’s field goal on the final play of the half.

Travis Lombardo led the Middle defense with four pass breakups against an Absegami team that put up 251 passing yards.

Licata produced one of the finest seasons by a Panther kicker in program history. He made 6-of-7 field goal attempts and 15-of-16 extra-point kicks on the season despite missing all or parts of three games due to injury.

Middle finished the season at 6-4. All four losses were to teams still alive in the South Jersey playoffs – Oakcrest, Glassboro, Pleasantville and Raritan.

“To get six wins with all the injuries we’ve suffered and with all our losses to teams all in the semifinals of the state tournament, I think it was a pretty productive year,” Riggitano said.

Middle loses just a handful of players to graduation and should be in position to again challenge for a playoff berth and a West Jersey Football League division title.

“The challenge is to get the kids to be more productive in holding themselves accountable,” Riggitano said. “Teams that qualify for playoffs and win playoff games are the teams that continually get better each and every day and we haven’t done that. Yes, we’ve gotten better through year but to get to the next step and get to a level where you can compete against very good teams week in and week out, you have to lift the weights, you have to condition your body for the beating you’re going to take and you have to make sure you hold yourself accountable. If we all do that, we can have a nice year next year.”