VIDEO: Prep’s size, experience too much for Middle Township 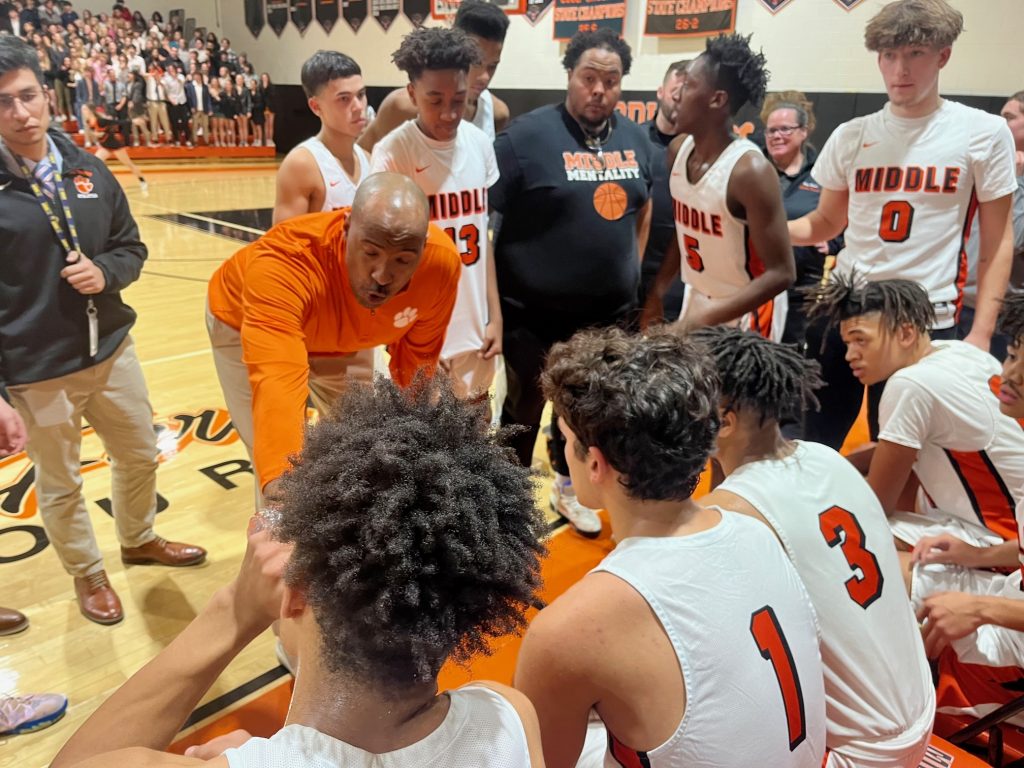 CAPE MAY COURT HOUSE – A Middle Township High School boys basketball team that entered the season with high expectations got a taste of the big time Monday evening.

St. Augustine Prep, which entered the season ranked 10th in the state, used its size and experience to wear down the Panthers, turning a competitive game through 1 ½ quarters into a comfortable 70-54 victory over Middle.

Monday’s game featured a playoff-like atmosphere. Both teams had student sections cheering on their respective teams. Middle’s gym, which can hold upwards of 1,000 spectators, was nearly sold out.

Middle (1-1) got off to a good start. The Panthers hit four three-pointers against St. Augustine’s zone defense and held their own on the defensive end. Middle’s Jamir McNeil, with a dunk after a steal, and Anthony Trombetta, with a nifty finish off a double-clutch move in the paint, electrified the crowd with acrobatic baskets.

Middle eventually took its largest lead of the game at 28-23 midway through the second quarter. But that’s when the game changed.

St. Augustine switched from zone to man-to-man defense and Middle had trouble getting good looks because of the Hermits’ length and athleticism. The result was a 29-7 St. Augustine run that lasted through the end of the third quarter that saw the Hermits take a 52-35 lead into the fourth.

“We just didn’t hit shots,” Greer said. “We missed a lot of shots we’ll usually make. Sometimes, that’s basketball. They’re a good team with a lot of experience. We expected them to come in here and play well.”

Middle did close to within 11 points with a little more than 4 ½ minutes remaining, but St. Augustine scored five straight points following a timeout to put the game away.

St. Augustine did much of its work offensively at the free-throw line, shooting 23 for 30. Matt Kouser, who made all nine of his free-throw attempts, led St. Augustine with 20 points. Semaj Bethea (14) and Elijah Brown (10) were also in double figures.

The Prep turned the ball over just six times in the game.

Middle is a young team whose starting lineup featured no seniors. Two sophomores and a freshman saw extensive playing time.

“These games are going to help us tremendously down the line,” Greer said. “The kids think they know what big games feel like, but they really don’t until they’re in them. This is going to help give us that experience. This school plays for March. Everything we’re doing now is about getting ready for March.”