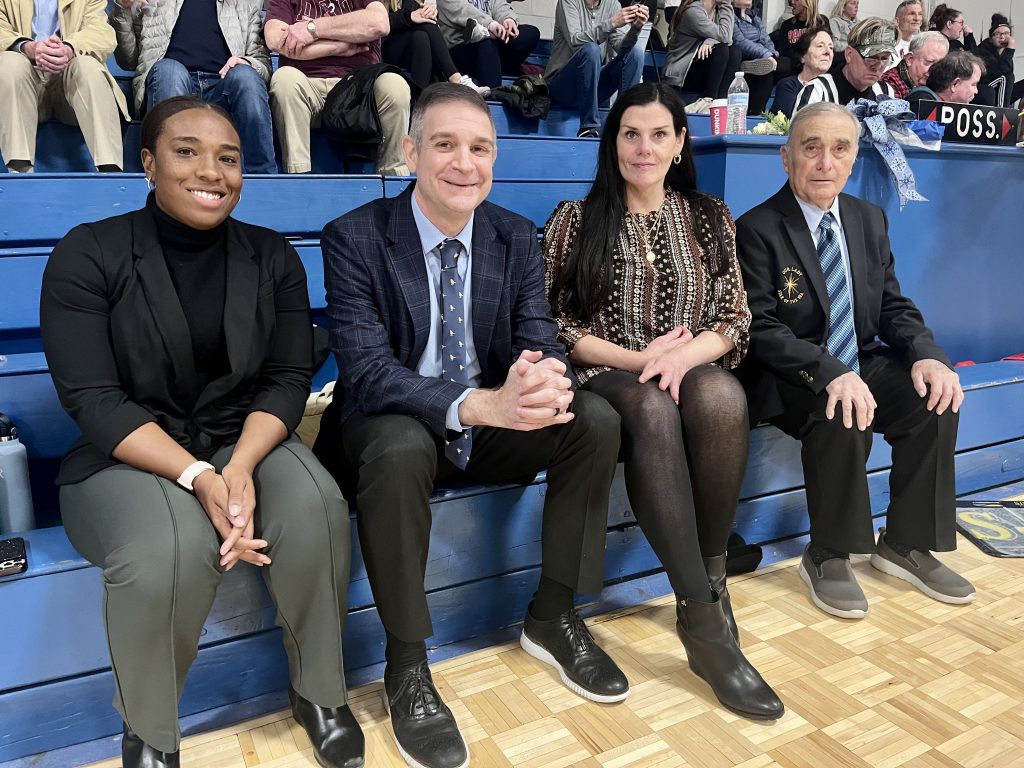 Overcome with emotion, the longtime Crusader basketball coach clutched a baseball cap of his beloved University of Notre Dame and said, “I don’t know what to think. I definitely didn’t ask for this.”

He may not have asked for it, but he got it anyway.

The Wildwood Catholic basketball community turned out for a ceremony to rename the basketball court in St. John’s name ahead of Monday’s girls basketball game against Ocean City.

Former players – including many members of the 1969 Cape-Atlantic League boys title team – former Wildwood Catholic administrators and teachers, former assistant coaches and many others were present for the ceremony. St. John’s wife, Jeanette, and son, Jeff, a career 1,000-point scorer at Wildwood Catholic and now a successful attorney, were also on hand.

Sal Zuccarello, a former player under St. John, later the athletic director at Wildwood Catholic and currently the school’s dean of students, served as master of ceremonies and gave a glowing, emotional tribute to the man everyone around the school knows simply as “Saint.”

After captaining the basketball team for two seasons prior to graduating from the school in 1956, St. John became head boys basketball coach at Wildwood Catholic in 1968, eventually serving two stints. He went 306-283 in his career, leading the program to South Jersey championships in 1981 and 1988 and Cape-Atlantic League titles in 1969 and 1992. He later returned for an 11-year stint as girls coach beginning in 2000, going 146-129. After stepping down from the top post, he has remained in the girls program as an assistant ever since.

At the conclusion of Monday’s ceremony, all in attendance – including players, coaches and fans of Ocean City – gave St. John a nearly 45-second standing ovation.

“I don’t know what words to use to describe this,” St. John said, again choking back tears. “It’s amazing to see all these people here.”

St. John, a member of the Al Carino Basketball Club of South Jersey Hall of Fame and the South Jersey Coaches Association Hall of Fame, is a retired schoolteacher who served as a longtime guidance counselor at Margaret Mace Elementary School.

But he’s best known for his association with Cape May County’s only Catholic high school, a legacy that will live on forever now that his name is etched into the school’s iconic gymnasium’s floor.

“Wildwood Catholic is a great academic school and a great athletic school, so what more could you ask for?” St. John asked rhetorically. “I remember first coming here to play basketball and then to coach. I’ve always just loved being here.”

Those around Wildwood Catholic have certainly loved having one of the school’s most loyal servants. That was further proven Monday evening.

There was a game to play after the ceremony to honor St. John ended, and it featured a thrilling finish.

Wildwood Catholic, after scoring just seven points in the opening half, rallied for a 38-31 overtime victory over Ocean City, outscoring the Raiders 8-1 in the extra session.

Ava Vogdes scored all 11 of her points after halftime – and had the only two field goals of the extra period – and also grabbed 13 rebounds to lead the Crusaders (3-0). Kaci Mikulski netted 13 points to lead Wildwood Catholic in scoring.