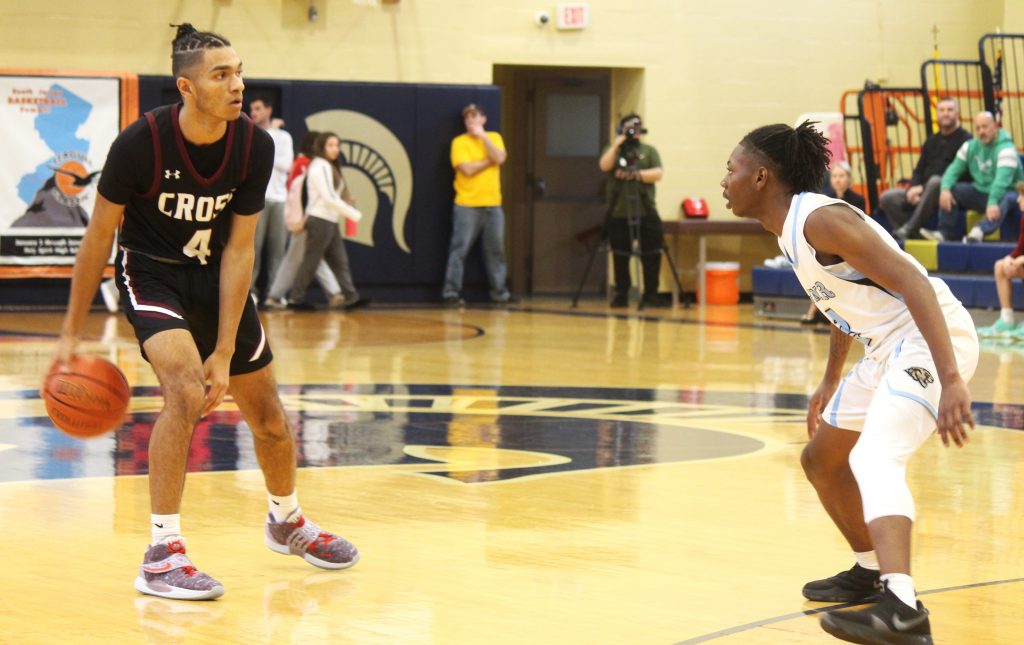 ABSECON – The Lower Cape May Regional High School boys basketball team faced a 22-point deficit in the third quarter of Saturday’s game against Holy Cross and was playing without its leading scorer.

Their chances of winning the game certainly looked grim.

But the Caper Tigers proved what can happen if you play all the way to the finish and remain unbeaten through eight games for their efforts.

Lower put together a ferocious rally over the final 12 minutes of regulation, took the lead for the first time on Macky Bonner’s three-pointer in overtime and eventually posted a stunning 52-50 victory over the Lancers at the Seagull Classic at Holy Spirit High School.

Lower played the game without senior forward Archie Lawler, the team’s leading scorer, who was out with a foot injury.

“After the hard times we had last year, I think the one thing the kids learned is that they know they can get back into games and that helped a lot,” Lower coach Scott Holden said. “They’ve been through it. They’re a veteran team. There’s a little bit of experience there and I think that’s the biggest thing showing through.”

“I was ticked off at our effort in the first half,” Holden said. “I thought we could beat this team with or without Archie. But when they got that 22-point lead, for the first time in my career I was thinking to myself that I didn’t know what to do. I felt lost. I talked with my assistants and we just figured we’d amp up play and press. And that changed everything.”

Holy Cross turned the ball over eight  times over the final 1 ½ quarters. Bonner’s layup off a steal tied the game at 48-48 with 3:31 remaining. Incredibly, neither team scored for the remainder of regulation, although Lower had a chance to win it at the death but saw Bonner’s foul-line jump shot go in and out and Ari Wright’s putback attempt spin off the rim as time expired.

The overtime session began with the same methodical pace as the final three minutes of regulation until Bonner’s three-pointer gave the Tigers their first lead of the game with 2:51 remaining.

Holy Cross made a layup with 1:15 to go to get to within one before Ty Bonner’s free throw made the score 52-50. After Lower’s Jacob Bey missed the front end of a one-and-one with 8.8 seconds to go, Holy Cross missed a three-pointer with three seconds to go and Macy Bonner rebounded the miss as time expired.

“I finally felt like we could win the game when we cut it to two,” Holden said.” Then we didn’t have to be in desperation mode. We could just go out and try to win the game. I think Holy Cross got to the point where they were trying not to lose and we just kept playing.”

Macky Bonner was no doubt the game’s Most Valuable Player. He scored 22 points on 9-of-16 shooting and also – as a 6-0 point guard – grabbed a game-high seven rebounds to go with four assists and three steals against just two turnovers.

“Macky’s been immense all season,” Holden said. “If you don’t come watch him every day, you might not understand what this kid does for us. The leadership, the deflections, the boxing out, all the little plays – all the stuff that doesn’t get in the papers – that’s what he’s been doing for us. Before the season, I thought he’d be a breakout player for us but he’s been that and more. He’s exceeded my expectations.”

Bey added 14 points on 5-of-6 shooting and also grabbed six rebounds. His traditional three-point play with 5:20 remaining in the fourth quarter was one of the highlights of Lower Cape May’s comeback, cutting the Holy Cross lead at the time to four points.

Lower Cape May’s Jacob Bey drives to the basket for two of his 14 points against Holy Cross.

Lower Cape May’s Braswell Thomas coasts to the basket after getting a steal in the second half.