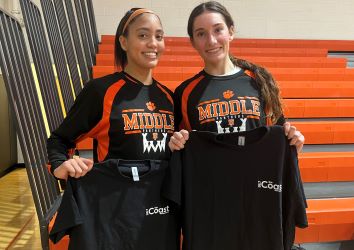 The Lady Panthers don’t win, however, without the defensive efforts of the 6-1 junior forward.

“There’s no question that she’s certainly a presence blocking shots and even just altering shots,” Middle coach John Leahy said. “And tonight, she did a lot of altering or blocking of a shot and then going and getting a rebound.”

With Palek closing off the areas around the basket and Middle’s guards chasing Mainland’s top scorers all over the perimeter, the Mustangs had difficulty scoring consistently. Middle held Mainland to just four points over 15 minutes of game time, spanning the start of the second quarter through less than a minute remaining in the third, the Lady Panthers building a 28-14 lead.

Mainland put together an 8-0 spurt to pull within six at 28-22 early in the fourth quarter, but Middle responded with a 7-0 run of its own behind baskets by Jada Elston and Iyanna Bennett sandwiched around a three-pointer by Mackenzie Palek to take its lead to 13 points. Mainland got no closer than nine points the rest of the way.

Elston finished with 14 points to lead a balanced scoring effort for Middle (7-2 overall, 2-0 CAL National). She had 11 of her 14 in the second half. Hannah Cappelletti added seven points for Middle.

Mainland shot only 13 for 42 from the floor for the game.

“Overall, our defensive effort was fantastic,” Leahy said. “We tried to make it hard on their three guards.”

The victory was an important one for Middle considering the amount of talented teams in the CAL National Conference.

“It’s a big game,” Leahy said. “If we want to put ourselves in position to win championships, then we have to beat good teams at home, and we just beat a very good team at home. This is really good for our group. The more closer games you have, the more you get the opportunity to learn how to close them out, trust each other and learn how to win together. Tonight was a step in the right direction.”