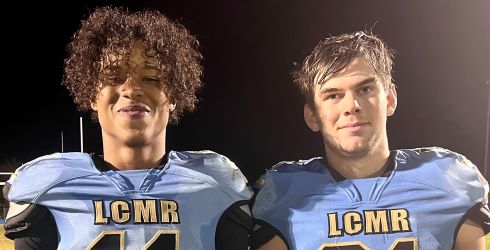 ERMA – Perhaps intensive preparation is overrated when it comes to performing well in a high school football game.

Just two days after accepting an extra consolation game against Gloucester Catholic, Lower Cape May exploded for four touchdowns over the game’s opening eight minutes en route to a 48-7 win over the Rams Thursday evening.

“The game was added late and we had one day to game plan,” Lower coach Lance Bailey said, “and I give our kids credit for putting the game plan for the first quarter and a half. I’m proud of them. For us to come out and play like that on basically one day’s worth of preparation is great.”

The victory improved Lower Cape May to 7-2, giving the program its first seven-win season since 2010.

Lower will play the winner of a game between Haddon Heights and Collingswood next Thursday at home in an NJSIAA Group II consolation invitational tournament game.

“Not many teams in this school have gone for seven (wins), so it’s a nice accomplishment,” Bailey said. “Now we have a chance to get to eight but we have to continue to work.”

Senior Archie Lawler and sophomore Braswell Thomas were the stars of the game for the Caper Tigers. Lawler caught two touchdown passes among his four receptions and also returned an interception 55 yards for a touchdown. Thomas picked off three passes, returning one of them 80 yards for a score.

Lower quarterback Hunter Ray was 7 for 17 passing for 76 yards and two touchdowns against one interception.

“We’ve been waiting for Brswell to explode like that defensively and Archie did as well,” Bailey said. “And then on offense, they doubled Braswell a lot so that left Archie open for Hunter.”

All told, Lower Cape May recorded five interceptions and recovered two fumbles in the victory. Mike Cronin also added an interception for the Tigers.