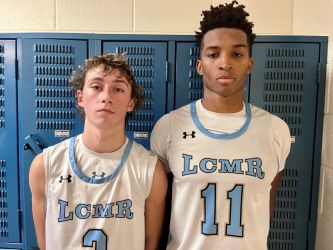 ERMA – The Lower Cape May Regional High School boys basketball team lost a lot of close games over the past two seasons.

Armed with more experience and depth, the Caper Tigers are turning that trend around so far in 2022-23.

Lower Cape May used a 13-0 run in the third quarter to take the lead for good en route to a 50-42 victory over local rival Wildwood Catholic Academy on Wednesday.

Macy Bonner (left) and Jacob Bey combined for 28 points and 14 rebounds for Lower Cape May in a 50-42 win over Wildwood Catholic.

The win moved the Tigers to 2-0. Their other victory came by a point over St. Joseph last weekend in a game in which Lower trailed the entire way until the final minute.

“Any kind of experience you have in close games is going to help,” Lower coach Scott Holden said. “We’ve talked about being better in close games. I think a big part of it is, we were a little fractured at times last year, but this year, so far, I feel like we’re really together and fighting for each other.”

“Before the game, I didn’t think we wanted to get into a running game with them, but then after the first half I felt like we needed to amp it up,” Holden said. “We weren’t getting much with our halfcourt offense, so I figured we’d try it. I think we made them a little uncomfortable and we got some turnovers and buckets out of it.”

Lower built a lead as high as 10 points in the fourth quarter. The Tigers made 7 of 9 free throws in the period.

Bonner led Lower with 15 points. He also had seven rebounds. Jacob Bey added 13 points and seven rebounds. Two of Bey’s points came off a thunderous dunk in the first half. Lawler had all seven of his points after halftime.

Lower Cape May, which outscored Wildwood Catholic 30-18 in the second half, had 13 offensive rebounds in the contest.

The victory was Lower’s first over Wildwood Catholic since the 2010-11 season. The Crusaders had won seven straight games over their county rival.

“It’s big for the kids,” Holden said. “With all the things these kids have gone through, especially the seniors, and this goes for every school, there’s nothing like beating a local rival. We talked pre-game about the old Big Four (Lower, Middle Township, Wildwood and Wildwood Catholic) and how big these games are. You could tell in the locker room after the game the kids were tickled pink to get the win.”

Harper topped all scorers with 22 points to go with eight rebounds and Jah Walker added 12 points for Wildwood Catholic (0-4). Wednesday’s eight-point loss represented the team’s largest defeat. Two of the losses were in overtime.

“We’re going up against teams that are way more experienced as a whole than us right now,” first-year Wildwood Catholic coach Will Wareham said. “That’s the one big difference. One of the other things hurting us is that we don’t do a good enough job on the defensive glass. We’re giving up too many offensive rebounds.

“If we fix a couple things and trust one another a little more, I think we’re OK. We’re sitting here at 0-4 but if we can turn it around there’s no doubt these four games will have helped us get there.”