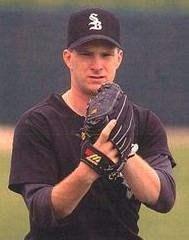 Cape May County will be featured prominently when the South Jersey Baseball Hall of Fame inducts its 2022 class later this month.

Three former Lower Cape May Regional High School stars and another former standout player and coach who’s currently the principal at Middle Township High School are among the inductees.

Worrell, a pitcher, is a 1988 graduate of Lower Cape May who later played at Stanford before playing seven seasons of minor league baseball. He was named a high school All-American as a senior at Lower, where he went 27-10 with 408 strikeouts and just 86 walks over his career. He posted earned run averages of 1.18 and 1.12 as a junior and senior, respectively. Worrell was also a standout as a hitter, batting .373 as a senior.

Worrell was drafted in the 37th round by the Boston Red Sox out of high school but chose to pitch at Stanford. He was later selected in the 18th round by the Chicago White Sox in 1992. He was named the organization’s Single A Pitcher of the Year in 1995 after posting a 1.52 ERA in 29 relief appearances for the Prince William Cannons. Worrell was later promoted to the Double A Birmingham Barons, where he was teammates with Michael Jordan, and was named Pitcher of the Year in 1996 after recording a 2.12 ERA in 35 relief appearances. He also briefly pitched at the Triple A levels for both the Nashville Sounds and Iowa Cubs before his retirement.

Worrell currently resides in Orlando, Fla., where he is a sales manager for a national winery company.

Olson, a 1993 graduate of Lower, is regarded by many as the top power hitter in program history. He belted 28 home runs in his high school career, finishing with a .421 career batting average and 121 career hits, 69 of which went for extra bases.

He went on to play for three seasons at Division I Indiana State, where he was a three-time All-Missouri Valley Conference selection, before being drafted by the Chicago White Sox in 1996. Olson was named a Single A Carolina League all-star in 1997 when he batted .260 with 18 home runs and 68 RBI in 404 at bats. Olson reached as high as Double A with the Birmingham Barons in 1998 before retiring as a player after batting .319 for Single A Winston-Salem in 1999.

Today, Olson is a health and physical education teacher at Lower Cape May and also runs a successful youth baseball batting instruction business in Cape May County.

Szczur was drafted by the Los Angeles Dodgers in the 38th round in 2007, but instead went on to star in both football and baseball at Villanova. He helped Villanova’s football team to a national championship and was twice named a Big East all-star in baseball, posting a career batting average of .392. He was named the Big East Player of the Year in his final season.

Szczur was selected in the fifth round of the 2010 draft by the Chicago Cubs and spent five seasons in the minors before being called up to the majors by the Cubs late in the 2014 season.

Szczur spent the entire 2016 season with the Cubs, batting .259 with five home runs and 24 RBI while often being used as a pinch hitter, pinch runner and late defensive replacement in the outfield.

He was traded to the San Diego Padres in 2017 and spent parts of two seasons in the majors and at Triple A before signing free-agent contracts with the Arizona Diamondbacks in 2018, the Philadelphia Phillies in 2019 and the St. Louis Cardinals in 2021. He announced his retirement in 2021.

Szcuzr also made national headlines when he donated bone marrow to a young Ukrainian girl battling leukemia. The procedure saved the girl’s life.

Today, Szczur resides just outside Cape May and has carved out a post-playing career as an artist.

West went on to a productive Division I college baseball career at Monmouth before signing with the Milwaukee Brewers organization as a free agent and playing Rookie ball in Helena in 1998. He later played for independent professional teams, including the Atlantic City Surf 2000 and 2001.

West went on to coach at Buena for 10 seasons, compiling a career record of 196-83. He guided the Chiefs to the 2011 Diamond Classic title and three Cape-Atlantic League championships. He was twice named South Jersey Coach of the Year.

A resident of Atco, West is currently in his third school year as the principal at Middle Township High School.

Other 2022 inductees into the South Jersey Baseball Hall of Fame include Andrew Bailey of Paul VI, David R. Miller of Highland and John Yurkow of Gloucester Catholic.

Bailey pitched for five major league teams, winning American League Rookie of the Year honors with the A’s in 2009. He was a two-time all-star.

Miller was a junior college All-American for Camden County College who spent six years in professional baseball after signing with the Baltimore Orioles in 1986.

Yurkow is a 1999 graduate of Rowan, where he was a three-time New Jersey Athletic Conference selection. He holds the program record for career runs with 179. Yurkow is currently the head baseball coach at Division I Penn.