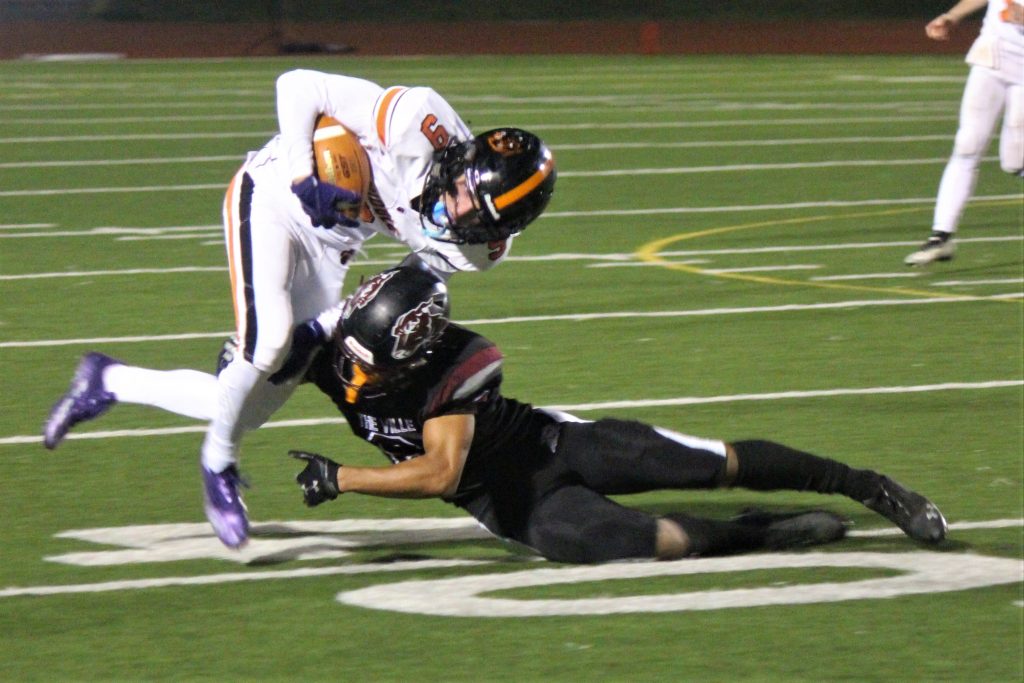 PLEASANTVILLE – The Middle Township High School football team had a chance to share a division title with a victory Friday night.

Pleasantville made sure that didn’t happen.

The Greyhounds broke open a close game in the second half and eventually posted a 21-0 victory to secure the West Jersey Football League’s Patriot Division title.

Pleasantville improved to 5-2 overall, 4-0 in division play. Middle, which had a five-game winning streak snapped, dropped to 5-3, 2-2.

Middle thought it had taken the lead early in the second quarter when Mark Oliver connected with Michael Zarfati on a 69-yard touchdown pass. But the play was called back due to a holding penalty.

“What was deflating was getting that touchdown called back in the first half,” Middle coach Frank Riggitano said. “Those things have hurt us all year. … That was a backbreaker. We had set that up well and we knew we weren’t going to get many opportunities to run that. If we score there, it’s a little bit of a different approach for us from there.”

Ibn Mitchell’s seven-yard touchdown run late in the half opened the scoring, giving Pleasantville a 7-0 lead at the break.

The Greyhounds scored again with four minutes left in the third quarter when Marlon Leslie turned a screen pass from Ahmad Jones into a 51-yard touchdown reception.

Middle responded with a good drive. Zamar Wakefield’s long kickoff return gave his team the ball near midfield. A few plays later, Zarfati caught a 27-yard pass from Oliver, followed by a seven-yard run by Remi Rodriguez to put Middle on Pleasantville’s 5-yard line. But a holding penalty and a sack on fourth down ended the threat.

“We moved the ball against them but we couldn’t finish,” Riggitano said. “And (Pleasantville) hits hard and they’re fast. They’re very good.”

Pleasantville put the game away with another touchdown early in the fourth quarter.

Despite the loss, Middle should still be in the Group II playoffs, although confirmation of such won’t be known until Sunday. The Panthers entered the weekend at No. 13 in the seedings. The top 16 teams qualify.

“We were hoping to win this because then we probably would’ve had the opportunity to play someone that’s much more comparable to us but now that’s not the case,” Riggitano said. “But the way the season started with all the injuries and losing the first two games, I think it’s a heck of an accomplishment for this crew to get to the playoffs.

“This game is humbling but it’s a great teaching tool for life. So many good things can happen but then adversity kicks in and you have to be able to respond.”

Middle Township’s Michael Zarfati is tackled by a Pleasantville player after making a reception in the first quarter.