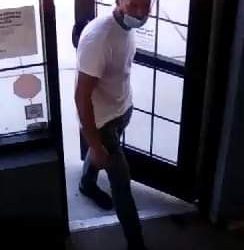 New Jersey State Police are looking for a man who stole a cellular phone from a Verizon store in Upper Township last month.  Police have released a photo of the man who entered the store on September 18th, and removed a cell phone without paying for it.  He entered a vehicle that left the area headed on Roosevelt Boulevard in the community.