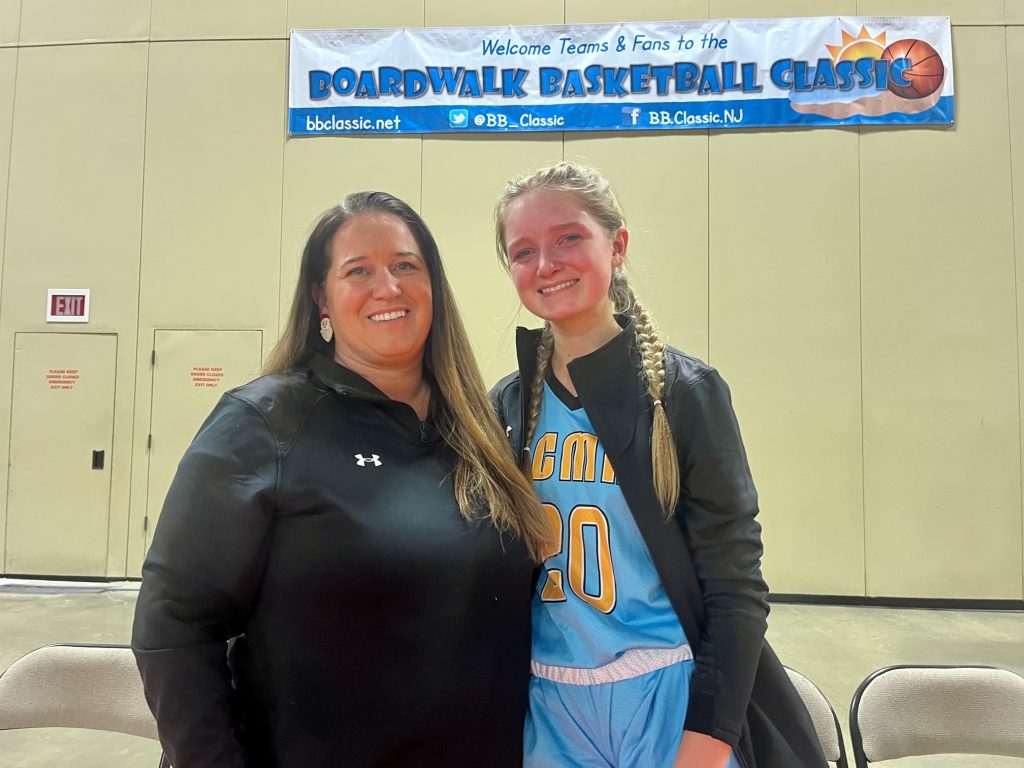 Hailey Elwell of the Lower Cape May girls basketball team poses with her mother, Jen, an assistant coach with the team, shortly after the team lost a close game to Wildwood in a showcase game at the Boardwalk Basketball Classic named in memory of Hailey’s aunt and Jen’s sister, Kaitlin Anzelone.

WILDWOOD – The storybook ending would’ve seen Hailey Elwell and her teammates on the Lower Cape May Regional High School girls basketball team pull off an upset of favored Wildwood at the Boardwalk Basketball Classic on Friday.

But while Lower Cape May fell to the Lady Warriors in the end, 46-35, the effort put forth by Elwell and her teammates in defeat was more than apropos of the moment.

The Boardwalk Classic showcase game was named in memory of Elwell’s aunt, Kaitlin Anzelone, a former three-sport standout and 2003 graduate of Wildwood High School who passed away as a college sophomore in 2005 after a battle with leukemia.

Also part of the game was Elwell’s mother, Jen, who sat on the bench as an assistant coach for Lower Cape May. Jen and her younger sister were the first and are still the only female siblings at Wildwood High School to win state basketball championships. Jen was part of the 1991 state championship team, while Kaitlin was a member of the three consecutive state title teams from 2000 through 2002.

Other family members, including Hailey’s grandparents, Rick and Connie Anzelone, were also in attendance for the game.

To this day, Kaitlin Anzelone is highly regarded in the Wildwoods community. A soccer, basketball and softball standout, she was a classic overachiever who got the most out of her athletic ability. In addition to the three state basketball titles, she also was part of four South Jersey title-winning basketball teams, a Cape-Atlantic League softball championship team and is still among the top five all-time in school history in career goals in soccer with 37. The soccer pitch at the Maxwell Field athletic complex in Wildwood is named in her memory. The Boardwalk Classic has honored Anzelone with a bracket or showcase game in every year the tournament has been held since her death.

Elwell and her Lower Cape May teammates exemplified Anzelone’s spirit with their performance against Wildwood. The Lady Tigers held a one-point lead at the half and rallied from a seven-point deficit in the third quarter to tie the game early in the fourth quarter before Wildwood went on a decisive 14-3 run to close the game.

“I feel really honored with how we played this game,” Elwell said. “My teammates are a good group of girls and they understood what this meant. This game was important to them, too, and we really gave it our all.”

Elwell never knew her aunt. But she’s well aware of her legacy.

“Whenever anyone talks about her, they just say amazing things,” Elwell said. “She was so into sports and she was very, very competitive. I know she really never regretted anything because she went out there and gave her all. That’s what I tried to do today.

“As a team, we really gave 100 percent. We need to come out like that every game. Even though we lost, we really did great.”

A performance Kaitlin Anzelone certainly would have been proud of.