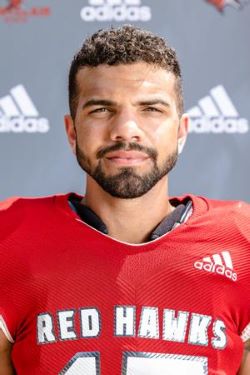 A Lower Cape May Regional High School graduate has made history in the football program at Montclair State University.

Ray, a safety, was named a second-team NJAC all-star this fall during his graduate student season. He recorded 59 tackles, along with two interceptions, two sacks and a fumble recovery.

In his final college game against William Paterson earlier this month, Ray blocked a punt and also scored his only career touchdown on a rushing play in his first-ever college appearance on offense.

Ray was named an honorable mention NJAC all-star as a freshman in 2018, before earning second-team honors in 2019. He then was named a first team all-conference selection during the shortened spring 2021 season (after the 2020 season was canceled due to the COVID-19 pandemic) and in the fall 2021 season.

Another Lower Cape May product, Aaron Cottrell of Kean University was named a first team NJAC selection as a linebacker for the second straight season. Cottrell was first in the NJAC in tackles with 109 this fall.

Like all college athletes who participated during the COVID-19 pandemic, Ray and Cottrell were each given fifth seasons of eligibility.