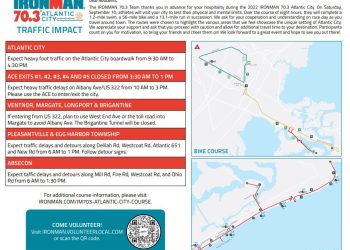 A major ironman event in Atlantic City will result in some closures of Expressway exits Saturday until 1:00pm.  Atlantic City Police announced that exits one through five will be closed until early Saturday afternoon for the event that includes running, biking, and swimming.  Traffic delays may be expected.