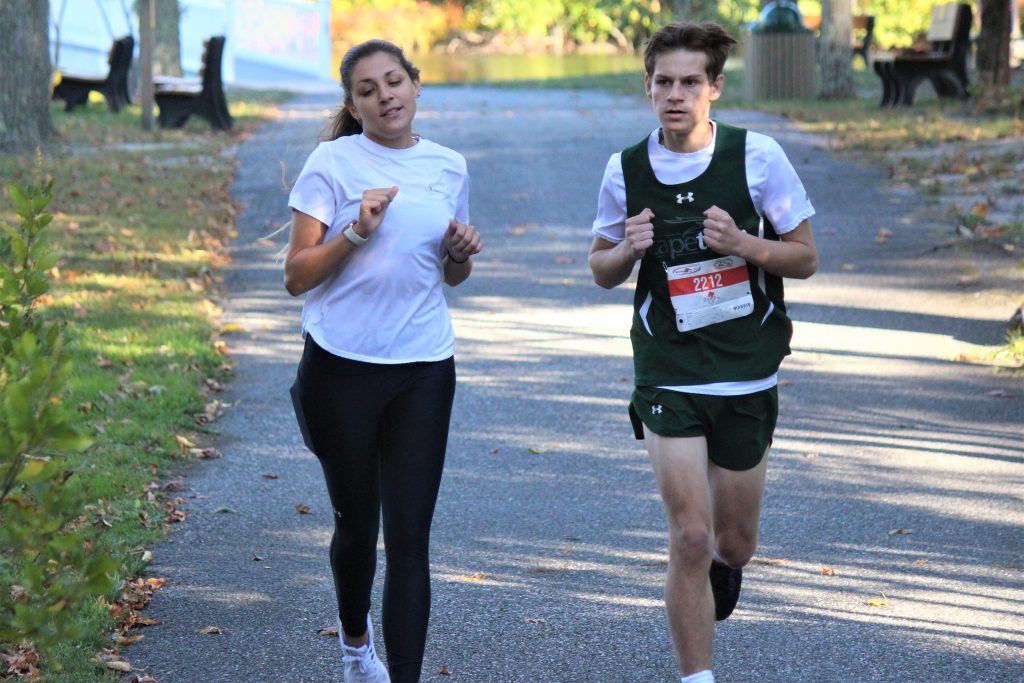 Cape May Tech junior Dylan Elko runs the trails at county park during the Cape May County Cross Country Championships with his running partner, Megan Clunn.

But one of the true winners of the meet happened to finish last among the 36 participants in the boys race.

Dylan Elko is an 18-year-old junior with special needs who attends Cape May County Technical High School. He also spends part of his day at the Cape May County Special Services School District due to his neurological condition.

That condition prevents Dylan from competing in any sports that involve contact. It does not prevent him from running, and he did so impressively at last Thursday’s meet.

“I like running – a lot,” Dylan said emphatically. “I’ve always been a runner. Running gives me an outlet.”

Cape May Tech cross country runner Dylan Elko (center), with his father, Michael (left), and brother Jake. His mother, Leslie, is not pictured.

Because of his condition, Dylan needs a partner with whom to run at practices and meets. Megan Clunn, a professional aide at the Special Services School District, joins him for practices and meets. Clunn was with Dylan every step of the way as he finished last Thursday’s county championship race to thunderous cheers from fellow runners and spectators.

“I’ve learned a lot from Dylan,” said Clunn, who ran cross country while in grade school but did not participate in high school at Wildwood Catholic. “One, I’ve gotten in better shape. But even better, I get to experience this with Dylan. I love to see him improve his time every week.”

“She’s my lucky charm,” he said. “She’s a great companion to run with.”

Dylan ran the county race in 29 minutes even, a personal-best time.

Dylan’s mother, Leslie Elko, and his brother, Jake Elko, were on hand to cheer Dylan at the race.

“I think it’s a wonderful opportunity they’ve been able to give my son,” Leslie said with a smile. “It’s a wonderful organization they have for all the students of Special Services and Cape May Tech.”

Leslie credited Clunn; Dylan’s case manager, Chelsea Coombs; and Cape May Tech coach Joe Bresan for making it possible for her son to compete in a high school sport.

“Ms. Coombs is dedicated, passionate, tenacious and determined that each child receives the services they need to succeed,” Leslie said. “We’re extremely fortunate that Dylan is in the Special Services School District because their educators and everyone involved there truly exemplify that no child is left behind.”

Dylan is studying auto mechanics at Cape May Tech.

“I can change oil, I can do a lot of things, like rotate tires, too,” Dylan said proudly. “I want to be an auto mechanic. That’s in my future.”

In the present, he simply wants to keep running.

“I’m so proud of him,” Leslie said. “He feels like he’s part of a team and that he belongs. Cross country is a sport he can compete in.”

Dylan is serving as an inspiration to all.

“Dylan likes to show that it’s possible for all children to compete in sports,” Leslie said.

Dylan Elko may have finished in last place at the county championship meet, but he won the hearts of all who participated in and witnessed the event.