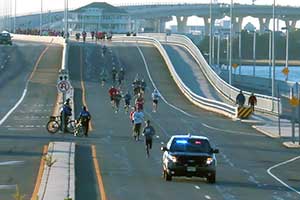 The inbound lanes to Ocean City on the Route 52 Causeway will be closed Saturday morning.  City officials announced that the lanes will be closed from 7:30-10:00am for the Trail of Two Cities run and walk event.  Three other routes into Ocean City will remain open.