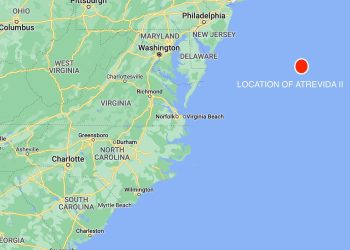 The United States Coast Guard has confirmed that the two men aboard the “Atrevida II” is safe and sound.  The two men were rescued by a tanker vessel, “Silver Muna”, who found the boat 214 miles away from Delaware.  The crew of two and their pet dog were taken aboard the tanker.