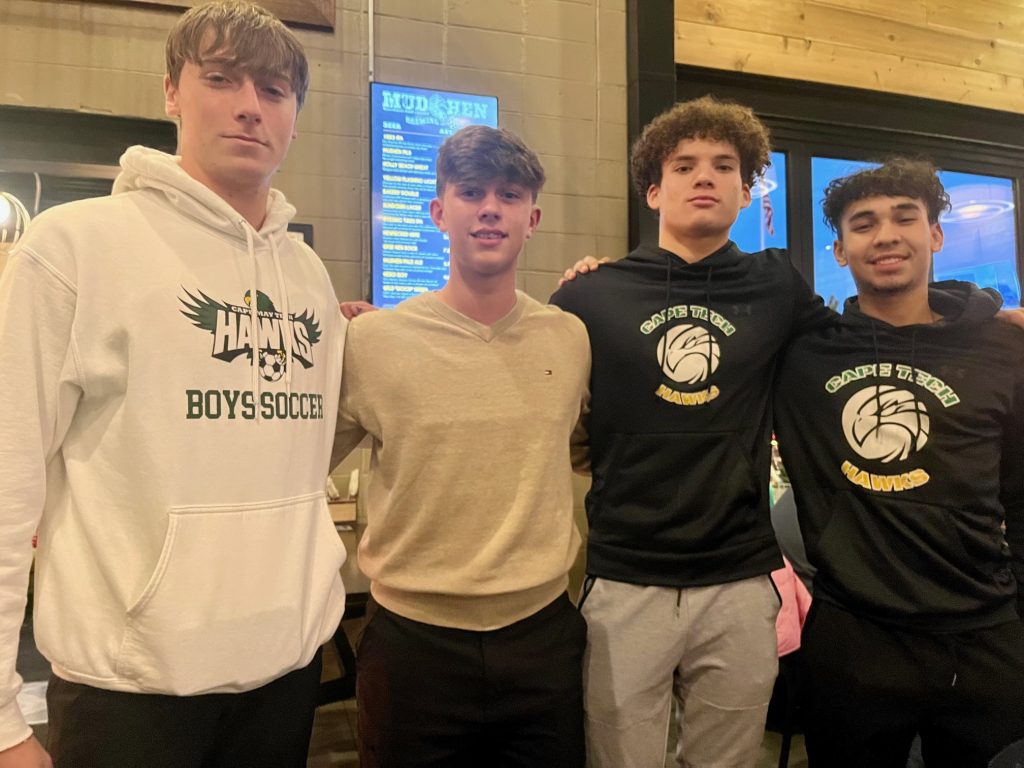 When the Middle Township High School boys basketball team hosted Lower Cape May for a scrimmage last week, about 350 people showed up to watch.

Parents, students and other fans filed into the gym to see the two local rivals play. Even the world-famous Buddy Tarbotton was on hand, shaking hands, kissing babies and talking hoops with the masses.

What does that tell us?

Well, it obviously shows how much high school boys basketball matters around these parts.

The sport returns with the start of its regular season this week, with all five of the local teams set to open their seasons by Saturday.

As usual, there’s great anticipation ahead of the new season.

For one, Lower Cape May, Middle Township, Wildwood and Wildwood Catholic each bring back their leading scorers from last season. Each of those teams also has many other key players returning.

There is a great buzz surrounding Middle Township, which returns a group of terrific backcourt players while also adding a couple of impact transfers and an impact freshman. The Panthers could be a challenger for the Cape-Atlantic League playoff tournament title.

Wildwood Catholic, even though it lost a couple of players to transfer, gained some transfers of its own and also returns all of its other players as it begins the season under a new head coach in Will Wareham.

Archie Lawler and Jacob Bey, both starters since their freshmen seasons, have returned for one final go-round at Lower Cape May.

Wildwood features a prolific scorer in Junior Hans, who will lead a rather young and undersized lineup.

Cape May Tech will be rebuilding after losing one of its all-time greats to graduation.

As much as we think we know about the teams now, there’s always a lot of uncertainty as the season begins.

One thing’s for sure, however – it’s going to be a lot of fun and it’s going to go fast, especially now that the length of the season has been reduced by a week.

The following is a look at each of the area’s high school boys basketball teams:

Outlook: With four-year starter and career 1,000-point scorer Dylan Delvecchio and a handful of other players no longer in the program due to graduation or transfer, this sets up as a rebuilding year for the Hawks. There is very limited varsity experience in this group, as only the four returning seniors saw much varsity time last year. But there are some multi-sport athletes in the program, which should help bring a level of competitiveness and toughness to the roster. Forward Mikey Coleman, a late bloomer at the high school level, has the potential to be a top scorer. He was lighting it up at the junior varsity level last season before being promoted to the varsity toward the end of the season. Guards James Murray and Adam Dille saw the most varsity time last season. Without much size or experience, Tech could struggle in some of its games against the better teams on its schedule. How successful this season is will depend on how the team competes against the rest.

Lower Cape May takes a rather experienced team into the new season, led by seniors (from left) Mike Cronin, Jacob Bey, Eulis Carter and Archie Lawler. The Tigers open the season Thursday at Oakcrest.

Outlook: Lower Cape May would like nothing more than to erase the disappointment of last season. The team lost five games by six points or less, three of which were by two points or less and finished with just nine wins despite returning four starters. With career 1,000-point scorer Archie Lawler (18 ppg) and Jacob Bey (11 ppg, 8 rpg) back for their fourth seasons as starters and point guard Macky Bonner (8 ppg) and wing Mike Cronin back for their third seasons as starters, Lower is shooting to be one of the better teams in the Cape-Atlantic United Conference. Lawler is considered one of the top players in the CAL and Bey and Bonner aren’t too far behind. Ari Wright is also a returning starter. A lack of depth plagued last year’s team but this season the Tigers seem better positioned to bring productive players off their bench, including Oguer Nunez, Braswell Thomas and Ty Bonner. With more capable ball handlers throughout the program, improved depth and the experience of Lawler, Bey and Bonner, Lower has the potential to significantly improve its victory total in 2022-23.

Sophomore Jamir McNeil (left), junior Anthony Trombetta (center) and junior Jermaine McNeil are the returning starters for a Middle Township team that many observers feel could be among the best in the Cape-Atlantic League.

Outlook: There’s no reason to dance around it – this team has a chance to be really, really good. The Panthers return three players in Jamir McNeil, Bubba McNeil and Anthony Trombetta, who each averaged in double figures in scoring last season. Jamir McNeil established himself as one of the Cape-Atlantic League’s best players last season as a freshman. There are some other returnees with varsity experience as well in Aydan Howell, Devon Bock and Troy Billiris. The Panthers’ lineup has been bolstered through the addition of four transfers, two of whom are expected to be in the rotation, and a very talented freshman. Re’ale Basquine, an overseas transfer from England, should emerge as one of the most athletic players in the Cape-Atlantic League. Landen Hart will also be a significant contributor after sitting out the first 30 days of the season after transferring from Wildwood Catholic. Chase Moore is a freshman who will also see significant time. One factor dampening expectations slightly is the loss of Michael Zarfati, a starter from last season who could miss the entire season after a knee injury suffered during football season. Although still quite young, Middle has enough talent and experience to compete for its second straight regular-season conference title and for the championship of the CAL playoff tournament. The Panthers will also be a major factor in the South Jersey Group II Tournament, although national power Camden and its roster full of Division I college recruits is looming there. The team’s conference and non-conference schedules are about as tough as it gets.

Outlook: Wildwood lost three starters from last season’s 17-win team and features a roster with just two seniors, neither of whom saw varsity action a season ago. Junior Hans, a dynamic guard who averaged 17.6 points per game last season, leads the Warriors. He’ll have to score at the same pace as last season or better for the Warriors to be competitive. Fellow returning starter Ryan Troiano is the team’s best defender and is expected to produce more offensively this season, while Jordan Fusik (55 three-pointers last season) is the club’s top perimeter threat. Harley Buscham, Lance Lillo, Alex Daniel, Brian Cunniff and Anthony Freeman are also pushing for varsity time. Lukas Basile could also eventually be a factor after sitting out the first 30 days of the season after transferring from Cape May Tech. With no seniors expected to start, this team’s best days might be a season away. Still, the Warriors should be competitive in the Tri-County Classic Division and could emerge as a threat to win a game or two in the South Jersey Group I Tournament, especially if their vastly undersized lineup figures out a way to rebound with consistency. Wildwood will need to get off to a good start as it faces a very difficult portion of its schedule immediately after the Christmas holidays.

Outlook: Wildwood Catholic begins the season with its third head coach in as many seasons, so there may be a learning curve for the Crusaders at the season’s outset. Still, despite losing two players to transfer after last season, Wildwood Catholic seems well positioned to improve upon last season’s record. Azmir Kates, Justin Harper and Manny Weaver bring size, experience and versatility to the Crusaders. Kates, Harper, Weaver, Cape May Tech transfer Patrick Bean, Jah Walker, Tayshaun Jackson and Ryan McGrath give the club lots of options for scoring. Any one of them could lead the team in scoring in any given game and it would not be surprising if the team ends up with three or four players averaging in double figures in points for the season. Wildwood Catholic is in the best conference in the CAL, the National, with powerhouses such as St. Augustine, Middle Township, St. Joseph and Egg Harbor Township and other solid teams such as Ocean City and Holy Spirit. While the schedule is tough, there’s no doubt the team has enough in its arsenal to be competitive with just about every opponent, especially at home. Expect the Crusaders to improve as the season progresses and challenge for a winning record. The difficult schedule should also pay dividends come CAL and state tournament time.